What Do Goldfish Eat?

Goldfish are known to be opportunistic eaters who have no self-control and continue eating even when it leads to their detriment (kinda like me).

If you have a pet goldfish or are planning on getting a goldfish, it’s vital to know what they eat and what you should steer clear of at all times.

Let’s take a look at the answer to the burning question, “what do goldfish eat?”

What Do Goldfish Eat?

Goldfish munch on several aquatic food items available to them to survive in the wild; the food they consume can include insects, plants, insect larvae, other fish’s or insects’ eggs, and crustaceans.

The following are some of the many food items that can help goldfish live a healthy life in the wild and become bigger than their usual, relatively smaller size:

Since goldfish have an offensive approach to hunting and have relatively smaller mouths, they either catch their prey by surprise or consume eggs, larvae, and plants.

If you have a pet goldfish, you can keep their diet in check and feed them healthful foods.

Goldfish that live in aquariums or ponds as pets have different eating habits and dietary needs than those in the wild.

However, most goldfish can survive on the same food type as previously mentioned – even in captivity.

The following are some food items that goldfish owners typically opt for:

Pellets are the most common type of fish food that goldfish owners opt for as they are readily available in pet stores. 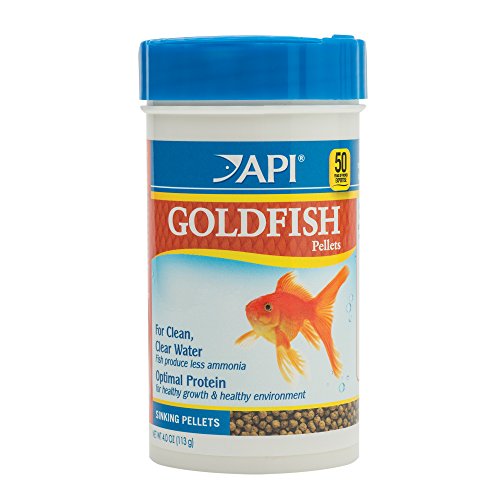 They are also easy-to-store and help measure the amount of food a goldfish consumes.

Additionally, some pallets float on top of the water, making it easier for fish owners to clean their tanks and avoid tank pollution.

However, you must cross-check the pellets to ensure they’re not too big for your goldfish to eat.

Although flakes lose their nutritional value once they are exposed to air, their availability and affordability make them an attractive option.

However, it’s important to note that, unlike pellets, flakes can pollute the water.

They can also cause digestion problems in goldfish because they can swallow air when trying to eat flakes.

If you’re looking for ways to create a balanced diet for your pet goldfish, freeze-dried foods are great options to consider.

They eliminate all risks of diseases passed through foods and offer lots of protein for your goldfish.

However, since they are not as budget-friendly or readily available as the other food items, they are not commonly preferred.

Some of the most common vegetables used to feed goldfish include kale, lettuce, cucumber, spinach, and peas.

Pea is usually the most preferred vegetable for goldfish as it helps strengthen the goldfish’s metabolism.

When feeding your goldfish peas, you have to be extra cautious and remove their shells carefully.

To do this, you can heat them to soften and remove the shell, and cut them into small pieces.

It’s also important to note that goldfish should only eat 2 to 3 peas at a time.

Things to Steer Clear Of When Feeding Goldfish

Contrary to popular belief, it would be best if you did not feed your pet goldfish – or those in the pond – bread.

The gluten in bread is hard for the goldfish to digest, and the bread can even expand in the fish’s stomach to cause constipation or, worse, death.

The following are some other food items to steer clear of at all times:

How Much Should Goldfish Eat?

The answer varies depending on where you’ve kept your pet goldfish and what you typically feed them.

For example, if you’re solely feeding your goldfish with pellets, it’s best to feed them 2 to 3 times a day or as per the label’s instructions.

Although goldfish eat any time they’re not resting, this does not mean you should constantly keep their tanks filled with food.

Doing so can lead to ammonia in the tank caused by the waste byproducts and become a danger to the goldfish.

It’ll be helpful to feed your goldfish a variety of foods in a day and only feed them as much as they can consume in a minute or two to avoid tank pollution.

Since the space isn’t limited in the wild and the living conditions are different, goldfish are constantly eating.

Now that we know what goldfish can and can’t eat and how often they should eat, let’s move on to some feeding tips that’ll prove advantageous for goldfish owners in the long run:

However, if you’re feeding them any hard fruits, make sure to boil or steam them to make them soft enough for them to eat.

You can feed your goldfish any of the following fruits:

My Goldfish Isn’t Growing – What Should I Feed It?

If your goldfish isn’t growing or it’s constantly losing its weight and color, it might be a sign that it’s not receiving the adequate nutrients it needs.

Although the tank size or living space plays a role in their size and diet, the nutrients have a relatively larger impact on their size.

The following are some nutrients that you will need to feed your goldfish:

Goldfish’s body typically produces most of the vitamins it requires, but there are some that you will need to provide them with through a healthy diet.

The essential vitamins to look for are vitamins A, D, K, and folic acid.

Most fish foods found at pet stores already contain such vitamins, but you should check the label to confirm.

You can also feed them live or frozen blood worms to ensure they get these vitamins.

Animal fat is more beneficial for goldfish than plant-based lipids.

However, it would be best to remember that their diet should only consist of 5% to 10% fats.

Small goldfish require approximately 45% protein in their diet, while the bigger ones require about 30% protein.

Their diet needs to be high in protein, which is not the case for other aquatic fish.

It’s also pertinent to note that you should feed your goldfish plant-based proteins, as they are easier for the fish to digest.

Their diet should only entail 10% or lower carbohydrates as more of it can cause diseases in goldfish.

Carbs and fiber are often listed as ‘Ash’ or ‘Bulk’ on the goldfish food packaging.

They also consume the aquatic plants in the aquarium or tank, which provides them with sufficient fiber, so you should prepare their diet plan accordingly.

Goldfish do require small amounts of minerals, like us humans.

However, mineral deficiency is not a concern for them as they get most of their minerals from water.

To conclude, goldfish can consume several food items readily available either at home or a nearby pet store.

However, their overeating habits can cause them to lead unhealthy life.

For this reason, goldfish owners need to keep a close check on what their goldfish are eating, when they’re eating, and how much is being consumed in a day.

We hope this article has provided you with sufficient information to prepare your goldfish’s healthy diet plan.