All aquarium owners want to establish a calm, peaceful home for their fish.

However, fish aggression is a common problem that many aquarium owners have to face at some point.

Some fish have a tendency to become quite aggressive toward their tank mates. If left unattended, they can disrupt the whole habitat of your fish tank.

So, here’s how you can deal with aggressive fish in your aquarium.

How to Deal with Aggressive Fish in an Aquarium

Here are some tips to help you deal with the aggressive fish in your aquarium.

1. Use a Net to Separate the Fish

Fish generally operate on the basis of the pecking order – larger aggressive fish will definitely hunt down and bully the smaller ones.

Your aquarium fish need to figure out their pecking order – the hierarchy set by nature.

However, at times, the fight that will lead to this finding might get a little too aggressive.

In such instances, you can quickly use a net to separate the fighting fish. It is the ideal temporary solution to stop aggressive fish. 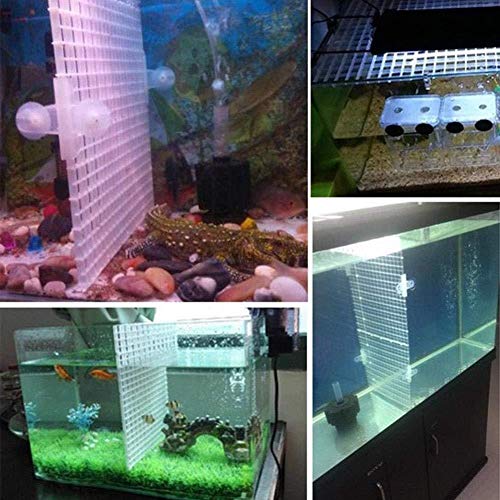 A solid tip to fight fish aggression is to rearrange the entire equipment and decorations – hang-up filters, driftwood, rocks, plants, etc. – of your aquarium to make it appear different.

Make sure that you don’t put anything back in the same spot.

Also, turn off the aquarium lights when you are rearranging the landscape as that will prevent your fish from noticing what you are doing.

Rearranging the habitat works as aggressive fish tend to also be territorial and they set up their territories and nests in particular areas of your aquarium.

They are much more likely to attack other fish that swim in their territory.

By upsetting the entire landscape, you will effectively create a level playing field for all your aquarium fish – both newly added and established fish.

Your old, aggressive fish will be fooled into believing that they are in a new setting; meanwhile, your new fish will be able to find their territories without getting bothered or harassed by the old fish.

Some fish are too passive and can be easily bullied and hurt by aggressive and territorial fish.

You need to add new decoration or vegetation to your aquarium for your docile fish species that can act as new hiding spots and protect them from the aggressors.

You can add tall plants or a thick forest of stems to create safe shelters for your docile fish. Make sure that you add decoration that is lacking in your aquarium.

If you already have plenty of low shelters, maybe invest in tall plants that will provide a safe swimming ground to your fish.

You can also add clay pots, columns, rockwork caves, and castles to your aquarium to provide your fish some cover and hide them from the aggressive fish. 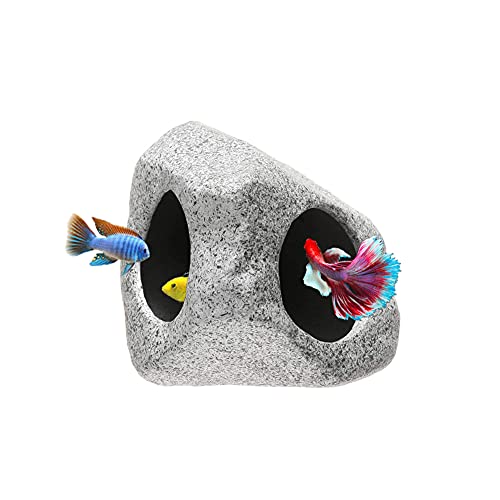 Since aggressive fish only attack fish that cross paths with them, this arrangement will definitely help keep them away from the meek fish species in your aquarium.

When all else fails, you will have to separate your aggressive fish from the ones they are attacking.

The first step is to decide which fish to separate – the aggressor or the victim.

If the injuries of your victim fish are too severe, you will have to immediately separate it from the other fish.

If you leave it in the same tank as the aggressive fish, they will likely kill it.

However, if the injuries of the victim fish are minor, then don’t remove them from the tank.

It will only reinforce the aggressive fish’s behavior and will encourage them to become more aggressive.

If your fish are too aggressive to handle, you need to set up a fish jail in your aquarium.

You can simply purchase a net breeder for small to medium-sized aggressors. 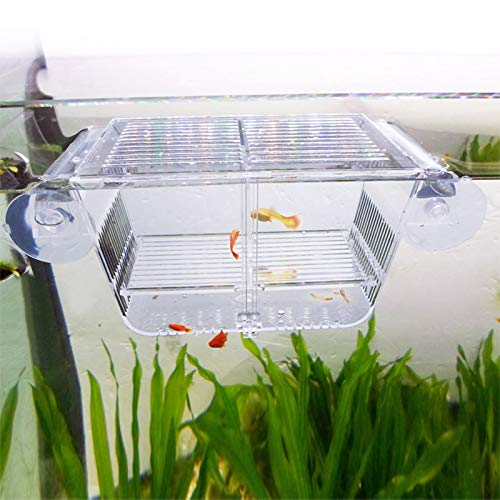 Hang it in one corner of your aquarium. Isolate the aggressive fish inside the jail for about a week or so.

This makeshift jail will allow the bully to see and smell the other fish, but not attack them. It will help them get used to each other’s presence.

It will also let the other fish set up strong territories, which might move your aggressive fish down the pecking order.

6. Get a Bigger Aquarium

At times, territorial fish will start acting aggressively when other fish repeatedly keep crossing over into their territories.

The best way to avoid this occurrence is to invest in a larger fish aquarium.

A small 20-gallon aquarium is too small a space for aggressive dwellers.

If you want to keep aggressive fish species with other fish, invest in a bigger 50-gallon tank.

It will help your fish establish their territories and will also curtail the fighting.

7. Move the Aggressive Fish into a Different Aquarium

When all else fails, the only thing left to do will be to put your aggressive fish in a separate tank altogether.

They are so territorial, predatory, and aggressive that keeping them in a communal aquarium is simply not a good choice.

So, the best thing you can do for your aggressive fish is to provide them their own aquarium.

Although most aggressive fish species cannot live with other fish species in an aquarium without fighting, they can live peacefully in small same-species groups.

The best examples of such aggressive fish are Tiger Barbs and Piranhas.

Tiger Barbs prefer to move about in groups and chase each other around.

If you simply keep them in groups of at least 6 members, they will peacefully live with each other.

As for Piranhas, they can flourish when kept in same-species groups.

Most Common Species of Aggressive Fish

Here are some common species of aggressive fish.

They are active omnivores with a huge appetite, so make sure to feed them on time.

Otherwise, they might get aggressive and go after each other and other small fish in your aquarium.

These fish can get quite aggressive if not fed properly and kept in a spacious aquarium.

This is because they like to move about all the time and can grow up to 8 inches.

They are voracious omnivores so make sure to feed them accordingly.

Whenever Pig Nose Puffer Fish sees a new tank mate, they will try to assert their dominance and threaten the poor newcomer.

They will likely charge straight at them with their mouths open wide.

The best way to deal with pufferfish is to get tank mates that are similar in size – about 6 inches – to them and are not easy to scare away.

When Rainbow Sharks reach a mature age, they can get quite territorial and aggressive.

Often times, your Rainbow Shark might attack the bottom dwellers of your aquarium in a bid to assert and claim their territory.

Find fish species with peaceful natures such as Danios and Barbs to accompany Rainbow sharks in an aquarium.

Tiger Barbs have a tendency to become quite aggressive when placed in a community tank.

Your Tiger Barb will likely terrorize your other fish and constantly chase them around the length of your aquarium.

Don’t keep fish with longer fins with Tiger Barbs in one aquarium. They have a habit of nibbling and biting at longer fins.

The best way to keep the aggressive Barbs is in groups of 5 or 6 so that they can swim in a compact school and stay away from your other fish.

Danios, Tetras, and Catfish can become perfect companions for your Tiger Barbs.

The Betta Fish is inarguably one of the most popular fish choices for indoor aquariums.

However, they have an aggressive nature that deters some people from keeping them. Bettas don’t even get along with their own species, let alone other fish species.

So, the best thing to do with Bettas is to keep 2 to 3 of them in a large aquarium without other fish species.

However, if you really want to add Bettas to your community aquarium, Catfish, Black Tetras, Croaking Gouramis, and Poecilia will make good companions for your Bettas.

Reasons Why Fish Get Aggressive With Each Other

Aggressive fish in your aquarium can fight with other fish for a variety of reasons.

So, let’s look at some reasons why fish get aggressive in an aquarium.

A lot of times, a fish fight breaks out over territory.

When it comes to defending their territory in the aquarium, some territorial fish can become extremely territorial and aggressive toward other fish.

They like to occupy certain areas of your aquarium and set them up as their territories.

Such areas provide them with places to hide, rest, and breed.

Whatever the chosen area, your fish might attack certain other fish species when they try to enter their area.

This is why it’s essential to rearrange your aquarium’s landscape every time you add a new fish to your aquarium that houses aggressive fish.

It will allow your tank mates to find new territories and at the same time, prevent the chances of them exhibiting any aggression over established territories.

Aggressive fish are also highly likely to fight other fish over food. They will fight with and drive off any fish that they believe to be a threat to their meal.

So, make sure that you spread out fish food throughout your aquarium and try to offer a variety of food simultaneously.

Aggressive fish have a tendency to exert their dominance in an aquarium. They will fight any species that try to threaten their power.

So, if you keep more than one type of aggressive fish together in a tank, they are likely to fight.

Your best bet is to introduce them together so that they both have an even playing field.

This way, they will look to mark their own territories instead of driving each other away from established territories.

Aggressive fish can harm other fish and in the process, disrupt the whole habitat of your community aquarium.

You can use the tips mentioned above to effectively deal with aggressive fish in your aquarium.