One of the most powerful forms of protein for fish, Daphnia is a tiny crustacean organism that aquatic owners love to feed daphnias to their fish.

Easy to raise and a tremendous food source, learn how to grow Daphnia of your own in an aquarium.

Because of their jerky appearance, Daphnia is commonly referred to as water fleas.

Despite their name, Daphnia is a type of crustacean, coming in around 0.2 and 3.0 mm long.

Their most popular purpose is acting as high-nutrient food for fish. However, they have many uses.

Freshwater ecosystems depend on Daphnia’s ability to convert phytoplankton and decaying matter into a more usable form.

Where Do Daphnia Normally Live?

Daphnia thrives in any naturally occurring, nutrient-rich body of water.

They are most common in freshwater bodies of water such as lakes or ponds, but they can even live in rain-filled ruts or puddles.

Because they are so small, Daphnia is fairly weak, which means they cannot live in any water bodies with a strong current.

When you are raising your Daphnia in your aquarium, you must make sure that you keep them in still calm waters as if the current is too strong, they will quickly perish.

Where to Grow Daphnia

Any aquatic owner can grow Daphnia in the comfort of their own home with just a few materials.

Because Daphnia tends to overcrowd tanks, we recommend growing them in a separate tank away from your fish.

Daphnia is also a freshwater creature only, which means you cannot use chlorine or tap water at all.

For growing, you’ll need a large tank with 5 or 6 gallons at the minimum but can also go up to 360 gallons.

The key to picking a gallon is to look at the surface area instead of depth. In the wild, Daphnia tends to hop over the surface of the water, skimming it in large swaths.

They very rarely go deep in the water, so if you do end up purchasing a smaller tank, make sure that you are buying one that isn’t too deep.

If you do not want to purchase a tank, you can grow Daphnia in a variety of alternative containers.

You can grow them in:

Where to Buy Daphnia Cultures

There are several places where you can purchase daphnia cultures to grow and raise.

Some places offer Daphnia raising kits, like Carolina, which come with a 1-1/2-gal plastic aquarium with instructions, a lid, food source, living starter culture of Daphnia, and instructions.

You can also purchase daphnia starter kits and starter cultures from more prominent companies like eBay and Amazon. 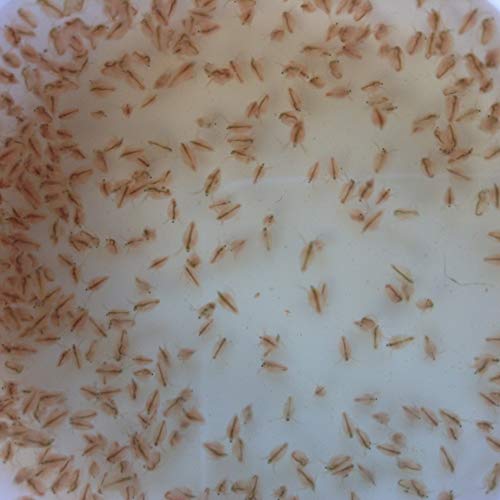 You may have some luck at your local aquarium store, although the cultures certainly aren’t as prominent as other items, so you may have better luck doing a quick search online or at least calling before you go to the store to make sure they carry them.

You can also catch them on your own; this is especially easy if you live near a body of water.

To catch Daphnia on your own, use a very fine net and move the net in very slow motions.

Once in the net, use a strainer to sift the Daphnia through various strainers.

How to Raise Daphnia

Once you purchase your tank and your cultures, you can now begin to raise your Daphnia.

Before you add the Daphnia culture, you must age the water. Make sure not to add chlorine or tap water, especially when making water changes.

Using aged water, change 20% of the water every two weeks. Some people like to use their old aquarium water when they do replace the water.

If your culture is not reproducing quickly, you might want to do more frequent water changes.

Luckily, baby Daphnia grows up quite quickly, and they reproduce quite a lot. Each Daphnia has ten babies.

That means that if you start with 100 Daphnia, you’ll have 1000 Daphnia in one week.

Their average life span is only about two or so months, so you’ll be able to produce quite the thriving population in no time.

What are the Correct pH Levels?

To raise Daphnia, you must keep the pH levels of your water ranging between 6.2 to 8.9.

However, most growers have luck keeping their pH around 7.8.

Before you bring home your Daphnia, you may want to invest in a pH meter to continually keep track of where your pH levels are to ensure maximum opportunity for your Daphnia to live and thrive.

The ideal temperature for Daphnia is usually between 72 to 85 degrees.

Be careful of keeping your Daphnia water outside or by a window: when the water gets too warm, Daphnia culture will stop reproducing.

Amount of Light and Oxygen

Even though Daphnia can become too hot under direct light, you still need to keep your containers in the sunshine for most of the afternoon.

They require around 8 hours of light but can do with as little as 6. If you grow your Daphnia indoors, you will need to purchase an indoor light.

Since the indoor light is not as powerful as the sun, you will need to have them under the light for at least 10 hours.

The daphnia culture doesn’t need large amounts of oxygen to live and thrive.

In fact, if your tanks have a large surface area and are kept outside, they do not need any additional aeration.

If you keep your containers inside, you should keep light aeration (as in just enough to break the water surface). Too much aeration can kill your Daphnia.

What to Feed Daphnia

Daphnia isn’t too picky about what they eat. You can feed them anything from algae, yeast, to bacteria.

Many growers choose to feed their Daphnia yeast as it’s easy enough to monitor when they need more.

To feed Daphnia with yeast, purchase yeast powder, pour the powder into a bucket or large container, and mix it thoroughly with water.

Once thoroughly mixed, pour the yeast and water mixture into your Daphnia tank enough so that the water becomes slightly cloudy.

Since the Daphnia are filter feeders, they will eat the yeast in the water. You’ll be able to clearly tell when they need more yeast because the water will become clear.

It’s important to strike the right balance of keeping enough food in there versus overfeeding them, which will lead to another host of problems.

While Daphnia offers many benefits to the fish and aquatic life owner, they also come with issues that you need to be aware of.

They can potentially limit the population and health of other organisms that share a tank with them as they are a direct competitor for food and oxygen.

Because of this competition, you should not keep your fish in the same tank as Daphnia because of how severely they limit oxygen.

In a similar light, it’s important to harvest your Daphnia on a regular basis. If you let your Daphnia overgrow, you can crash the population as they will suffer from overcrowding.

Although Daphnia is easy enough to care for, there’s always a learning curve when raising new organisms.

As a result, you should always keep multiple containers of Daphnia in case one of your cultures dies.

How to Harvest Daphnia

Harvesting your Daphnia is a simple, straightforward process. The only tools you will need are a fine mesh strainer net and then a small container to put your Daphnia in.

The first step is to insert your strainer into your Daphnia container and skim the surface until you collect as many Daphnia as you can.

The Daphnia will primarily be at the top part of the water, so you’ll want to make sure you’re skimming the top of the water instead of dipping your net too far below as not only will you not scoop Daphnia, but you will also risk them being able to swim away.

It will be easy to tell if you have collected Daphnia because they are small and light brown, so you will be able to see them fill up the bottom of your net.

Once you are satisfied with the amount, place your Daphnia in your container and feed your fish in a separate tank.

Raising Daphnia is a rewarding process that will provide much nutrition and protein to your fish.

Because Daphnia reproduces so quickly, once you get the hang of it, you should be able to rapidly raise Daphnia.

To make sure your Daphnia is thriving, always be checking the pH levels and temperature of your water. If you notice that your culture isn’t reproducing or is dying off, that’s a big indicator that something is off in your environment.