What to Feed Bluegill In An Aquarium? 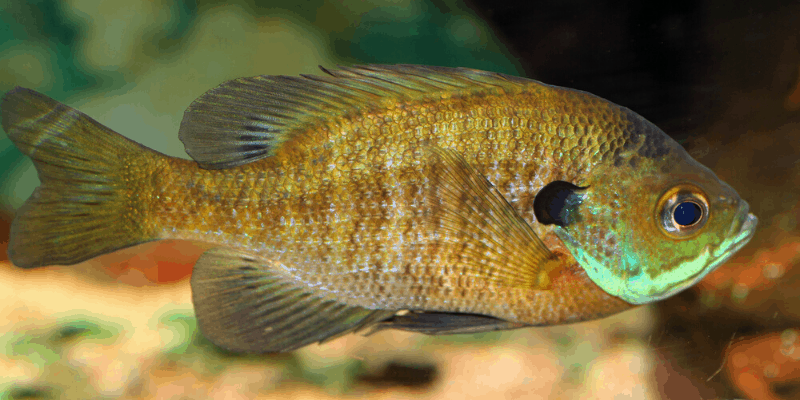 Aquarium fish require attention and care because of their characteristics. They require a spacious tank and clean water. According to the characteristics of the fish, you decide to keep, you’ll have to monitor their feed, too.

The Exotic Pygmy Sunfish include Bluegills in its broad category. Bluegills are typical freshwater sunfish that are long-bodied fish. They can grow over 12 inches, weigh about 2 – 2.5 kilograms and be kept in home aquariums.

These fish usually require around 50 to 70 gallons of water with 6.8 to 7.2 pH level and can be kept with other tank mates, too. Native to North America and mostly residing in rivers, lakes, and ponds, the Bluegill fish is actually quite friendly and will even eat from your hand!

Bluegills are also known by other names. Depending on the region, they’re also called bream, pond perch, brim, and even crappies. They also have some interesting habits.

For example, they prefer weed beds for cover and like to hide behind tall aquarium plants to hide from predators and hunt for small crustaceans and water insects to eat. Their average lifespan is around four to six years, and they can lay over 20,000 eggs a year!

Their bold personality is complemented by their iridescent colors and dietary habits. Which begets the question, what can bluegills eat?

Interestingly, Bluegills are known for keeping the crustacean and insect population in ponds low but it turns out, they’ll eat just about anything because they’re carnivorous animals.

What to Feed Bluegill Fish in the Aquarium

So what to feed Bluegills in an aquarium? Here are some great options for your aquarium bluegills.

Bluegills are carnivores, meaning they can consume other small kinds of fish.

Minnows are a popular choice for bluegills which are kept in aquariums. Usually, minnows are dropped right in around feeding time and the bluegills “hunt” for their prey.

In some cases, the minnow’s tail can also be trimmed – no harm comes to the fish when this happens and no blood is drawn. The soft lower or upper half is usually trimmed, so the minnow will struggle to swim, resembling a struggling prey that incited the bluegills to hunt.

These are easily available in pet shops and aren’t that expensive either. This hassle-free feed is very popularly used for bluegills reared in aquariums.

Usually used in the wild to capture bluegills from their habitat, baitfish is also a favorite amongst bluegill keepers because it’s one of the easiest feeds to find, and bluegills love consuming it, too.

These other kinds of small fish are also a popular choice for aquarium bluegills. Usually bought from bait shops, these 2 – 3 inches long fish are great for mature bluegills.

Bluegills have been observed to feed on shiners during the fall and summer and keeping in line with that, keepers do feed their bluegills smaller ones.

These are also popularly used as bait when bluegill fishing season arises and contain enough nutrients to keep a fully grown bluegill fish satiated for a while.

Bluegills will eat anything, from larvae to full-grown insects. Some popular choices that can be seen across the internet are crickets and mealworms. In fact, some bluegills’ keepers even feed their fish grasshoppers.

In the wild, insects are even used as bait to draw to bluegills to the surface, which just goes to show that they’re eager to consume insects. However, keeping them alive can be a tough issue, so keepers have to be quick when feeding their bluegill.

Bluegills also feed on bugs found in water! They’ll eat mosquito larvae, insect larvae, and other bugs and their eggs. During the summer, they provide a good nutrient opportunity for the bluegill and are an important food source for them. Although it is a little tough to feed them this in an aquarium, some bluegill keepers buy frozen larvae or insects that are specifically for fish feeding.

These fish are also fond of nightcrawlers and other terrestrial bugs. They’ll eat bees, spiders, moths, gnats, ants, and even flies when in the wild. Especially in the wild, bluegills have been observed to enjoy hunting and feeding on these bugs. Most of these can be introduced to the aquarium when alive, but keepers prefer to pick frozen and freeze-dried varieties.

These small fish have cylindrical bodies with downward-pointing mouths that are puckering – and surprisingly, these are a popular food choice for many fish out there, including bluegills. If your aquarium has large bluegills, they’re definitely going to enjoy feeding on these.

For bluegills in aquariums, smaller suckers are a great feed idea. In the wild, suckers are bred and born just in time when seasons are changing and the bluegill’s diet changes, too. Although it’s hard for keepers to get their hands on some live suckers, they are a bluegill’s favorite!

Crustaceans are also part of a bluegill’s diet. They can be kept as tank mates or introduced during meal times and are also available in fish shops or feed shops. Usually, Bluegills enjoy small freshwater shrimp and small crayfish.

Small shad fish can also be fed to Bluegills in aquariums. Bluegills have small mouths that make these fish easy for them to feed on and mostly, bluegills feed on Gizzard shad, Threadfin Shad and even small American Shad.

Although this is difficult for keepers to get, it is one of the foods that bluegills eat. Post capture, it’s tough to keep shads alive because research states that they stress too much and can die before you can put them in your bluegill’s tank!

Most of the time, young bluegills will feed on zooplankton. This is their primary source of food until they’re big enough to consume other varieties. It contains enough nutrients to help them grow and develop.

These microscopic organisms are usually found in the wild, but in the case of aquariums, they can be introduced to the water where they will be able to multiply, providing bluegills opportunity to feed on them. In the case of larger bluegills, they prefer other meal options, but a bunched up zooplankton can provide quite a mouthful.

As an alternative to live fish, this option also provides the bluegills with the required nutrition they need to survive.

Taking Care Of Your Bluegills

Below are some of the things to know to make sure you’re taking the best possible care of bluegills in your aquarium.

Bluegills that are kept in aquariums need to be monitored. Overfeeding fish can result in various digestive and urinary disorders that can infect the whole tank.

The ideal time to feed bluegills is during day time. The best time is between 2 to 3 p.m. and the feeding session should last for up to 10 seconds. After that, excess food should be removed because it can decay and compromise the quality of the water tank.

Bluefish can also go without eating about 7 – 12 days. Ideally, it’s best not to starve them over 2 days because their will to hunt deteriorates.

Bluegills can be aggressive when paired with other tank mates.

Usually, they’re kept alone with their kind but if your aquarium is pretty large and you’re thinking of introducing other tank mates, the following are some species that can survive with bluegills:

Bluegills are really easy to take care of when it comes to feeding. In fact, many of them will even nibble on aquarium plants which you may have set about. In larger pool aquariums, they will even feed off algae!

You’ll even find many blogs all over, where bluegill keepers have said their bluegills enjoy beetles, fresh prawns, earthworms, and even sow bugs.

So, if you’re worried that your bluegill isn’t getting the right nutrition or has limited options – now you know what to give them!

Other than that, because these fish will eat just about anything, you really don’t have to worry about getting them their meals!

As always, fish are living beings and require attention despite how easy or difficult they are to take care of.

Younger bluegills should be transferred to bigger tanks as they grow and as their size changes, so should their feed – from pellets and plants, it should progress towards feed like small fish and worms.

You may also like the following articles about aquarium: