What Fish Can Live With Betta Fish in an Aquarium?

Many fish enthusiasts enjoy keeping Betta fish due to their vibrant colors and unique long-finned appearance.

However, Betta fish are also known to be incredibly territorial and aggressive compared to other pet fish species. This reputation has earned them the title of “fighting fish” in many different countries.

Owners who are interested in keeping these fish will need to house them with the right tank mates.

Many factors are used to determine which fish species can live suitably with Betta fish. It is believed that Bettas can co-exist with the following fish varieties:

To get a better understanding of why Bettas have a hard time getting along with other fish, we need to learn about their behavior.

Why is it so difficult to keep Bettas with other fish?

Betta fish are a territorial and aggressive species that are usually kept in isolation. Owners with small tanks should avoid giving their Bettas tank-mates as they may feel their territory is being violated.

While many owners keep Betta fish in isolation due to their aggressive nature, this often leads to their fish getting bored or depressed over time. These fish do need some form of stimulation, so you should consider getting them the right tank-mates.

Your Betta may be able to get along with other fish if they have enough space to share in a large tank.

However, owners will need to follow some guidelines to reduce the likelihood of these fighting-fish living up to their name.

How many tank mates can Bettas have?

Your Betta should be housed alone or with multiple tank-mates from the aforementioned list of fish. Keeping only one other fish in the same tank with your Betta is a bad idea as they may get bullied.

To combat this problem, owners should get fish that participate in shoaling.

Shoaling fish such as Tetra will cluster and swim together in a group whenever they feel threatened. Your Betta is less likely to attack these fish when they are backed up by their shoal mates.

Can you keep multiple Betta fish together?

You can also consider keeping multiple Betta fishes in the same aquarium, but you need to take care of the following:

Male Betta fish should NEVER be kept together as they will behave aggressively towards one another.

You can’t keep an eye on your fish at all times, so they will end up harming each other at some point.

If you’re desperate to get multiple Betta fish, you should opt to get female ones. Female Bettas are believed to be less aggressive than their male counterparts.

Many owners have had success with keeping 4-6 female Bettas together in a large tank.

However, these tanks do need to feature vegetation and decorations that serve as hiding or retreating spots for these fish. If you’re lucky, these fish will form a “sorority” and co-exist peacefully with one another.

Keeping a male and a female Betta together

Keeping a male and a female Betta together is a more complicated matter.

Experts advise against keeping Bettas of the opposite sex together. If you must keep both in the same tank, they should be separated with a tank divider.

If you are an experienced fish owner, you may be able to keep both fish in the same tank provided that it has a capacity of over 40 gallons. As mentioned earlier, this tank should also feature plenty of vegetation and decorations that can be used to hide from the other Betta.

Some owners prefer to keep a female Betta sorority along with a single male Betta fish. This can be done if your tank is long and wide rather than tall. It’s better to add the male Betta to the tank only after the female sorority has been established.

Before adding your male Betta to the tank, you should allow them to see the females from a safe setting first.

This can be achieved with the help of a tank divider. You can remove this divider and allow the male Betta to interact with the females after a few days.

Male bettas typically mate with the dominant female in a sorority. In some cases, this can lead to the female Bettas being aggressive towards the male. If you witness excessive bullying occurring, you should remove your male Betta and keep them separately.

Other fish that can live with Betta

As mentioned earlier, some other species of fish can co-exist with Bettas in large tanks. These other fish should be calm natured and should not display territorial or overly aggressive characteristics.

Appearance-wise, these fish should not resemble other Betta fish. This means slow-moving large finned colorful fish are a bad option as tank-mates.

Another guideline to remember is to avoid adding new fish to a tank that houses a sole Betta. It’s generally better to introduce a Betta to a pre-established community of fish.

Some species you can keep with Betta include:

Many different types of Tetra fish exist, so it’s difficult to say if all of them get along with Betta fish. 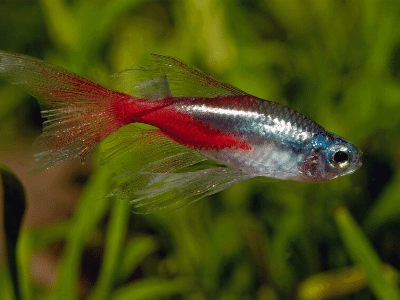 Neon Tetras are generally a popular choice with Betta owners. These fish are fast swimmers and are speedy enough to escape from your Betta if they decide to pursue them.

Your Betta may consider the upper level of the tank to be their territory, so it’s unlikely that they would be disturbed by shoals of Neon Tetra swimming below.

This variety of Tetra survives best in groups of 10 – 12. So you should consider adding this number of Neon Tetras to your tank at one go.

Black Neon Tetras are similar to the standard Neon Tetra. 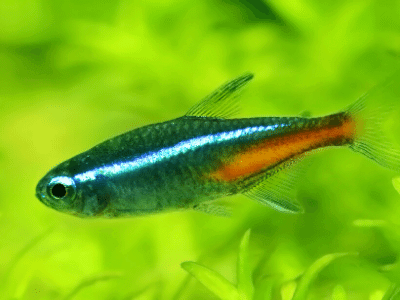 However, these fish have a duller darker color than their Neon counterparts. Due to this reason, they are less likely to be mistaken for other Betta fish.

Many species of Tetra make great tank-mates for your Betta, but certain Tetra species should be avoided.

Black Phantom Tetras and Serpae Tetras in particular are known to nip at other fish. This nipping may not pose a threat to your Betta, but it can cause them to get severely stressed.

Rasbora is another shoaling fish variety that gets along with Betta. 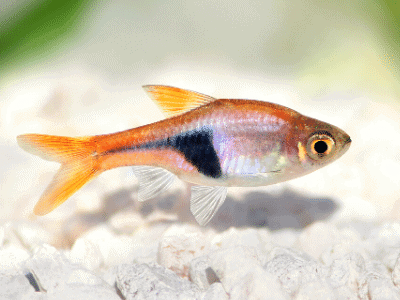 These fish are placid and shouldn’t cause any issues with your Betta. These fish have a diet that is very similar to Betta.

If you do get Harlequin Rasbora for your tank, you should get 5 – 6 at a time. This is the ideal number needed for them to form a shoal.

Glass catfish are a unique looking variety of catfish with translucent bodies. 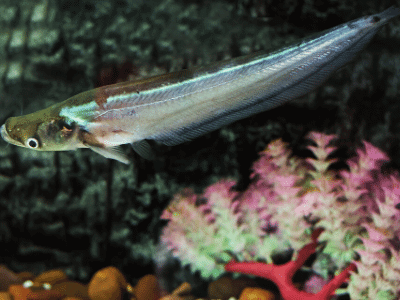 They have the signature catfish “barbels” on their heads which distinguishes them as catfish. These fish have a peaceful temperament so they’re unlikely to bother your Betta.

These fish should be given a tank with plenty of hiding spots to get away from your Betta if needed. They survive best in schools of 10 – 12. 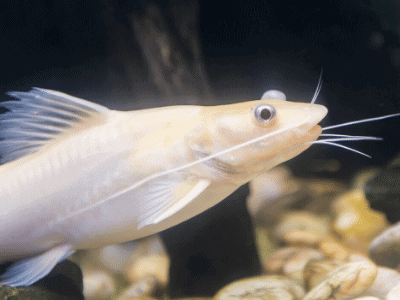 They are a peaceful fish variety that prefers to dwell at the bottom of tanks and feed on algae.

These fish do not have a flashy appearance, so they aren’t going to trigger your Betta’s aggression.

However, these fish can grow to be 3 – 5 inches in size, so you may need a tank that is at least 25 gallons in size.

Endler Livebearers resemble Guppies, but they have a less flashy appearance. 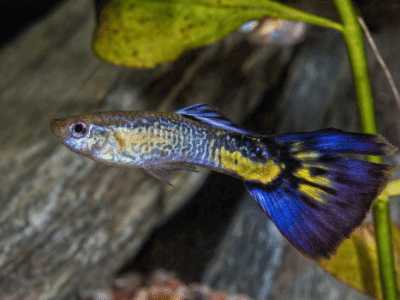 These fish are less likely to set your Betta’s aggression off compared to Guppies due to this reason.

Endlers also enjoy swimming around and hiding in plants underwater, so your tank should feature a fair amount of vegetation.

Betta fish are a territorial species that rarely get along with other fish. These fish can’t be housed with other male Bettas, but they can share a tank with a group of female Bettas under the right supervision.

Bettas generally don’t get along with other species that resemble Bettas. This means fish with colorful large fins should be avoided.

Your Betta should be able to tolerate the presence of fish such as Neon Tetras, Black Neon Tetras, Harlequin Rasboras, Glass Catfish, Bristlenose Catfish, and Endler Livebearers.

If you intend to keep other fish alongside your Betta, you will need a large tank that features plenty of vegetation and decorations. These will serve as hiding spots for your Betta and other fish if they want to escape.

It’s easier to add a Betta to a pre-established fish community rather than add fish to a tank with an existing Betta.

Before allowing Bettas to interact with other fish, you should keep them separated using a tank divider for a few days. This will make them more comfortable with having other fish around.