What are the Most Intelligent Aquarium Fish?

For most people, the thought of fishkeeping conjures up images of beautiful tropical aquariums and stunning fish swimming through the tanks.

A beautiful thought, yes. But — admittedly — not very exciting.

This has led to the misconception that fishkeeping is a boring hobby. And that pet fish are not as thrilling as the typical, fluffy, warm-blooded pets.

But this is simply not true. Fish are just as smart and exciting as any other pet.

Here’s a closer look at some of the most intelligent aquarium fish you can keep to shake up your ideas on fishkeeping.

How Fish Are Smarter Than You Think

Instead of the ‘three-second memory’ you’ve likely heard of, most fish have excellent recall. Even the most basic aquarium inhabitants quickly learn when and where to anticipate food — most within a few weeks.

In trials to recognize fish intelligence, repeat tests showed fish could find treats or escape by passing through a series of rings in under a minute. When tested again, these fish were still able to recall the sequence up to a year later.

“In my aquatic veterinary career, I have worked with a broad spectrum of fish patients in all stages of health and disease. From working closely with all of these fish, I can tell you from experience that fish can be very intelligent and learn exceptionally fast.” – Jessie M Sanders, Certified Aquatic Veterinarian

Fish, or indeed animal intelligence, is only limited by what we perceive as ‘intelligence.’ Often, this is determined by our ability (or inability) to physically interact with them.

We can teach our dogs tricks like fetching and such, determining their intelligence.

However, interaction like this is not possible with fish.

But even then, fish are still just as smart as other pets and can learn tricks too. All we have to do is make a few adaptations for aquatic environments.

The Smartest Fish For Your Aquarium

Now let’s learn about the most intelligent fish that you can get for your aquariums.

Crowntail Bettas are some of the most beautiful freshwater fish you can keep. And they have personalities to match.

They don’t need a huge aquarium to be happy. Typically, the minimum tank requirement for a Crowntail Betta is a nano tank.

Crowntail Bettas are also incredibly curious. They prefer tanks with plenty of places to explore. Be sure to include plenty of plants, ornaments, and caves for your fish to play and hide in.

This curiosity is also a sign of their intelligence. In the words of Dr. Tomas Chamorro-Premuzic:

Although he was referring to people in business in this instance, these qualities are also visible in Betta fish and how they adapt to their environments.

Their curiosity is what fuels their intelligence, and is what makes them able to learn even the most advanced fish tricks.

We’ve all heard the joke that goldfish have a memory span of 30 seconds. But this couldn’t be further from the truth. 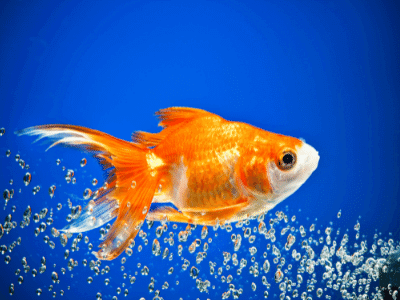 They are silly, clumsy, funny, friendly, and among the smartest freshwater fish.

For instance, they can see the same spectrum of colors as humans in addition to ultraviolet and infrared light. And although they don’t have ears, they can perceive sound through vibrations in the water.

What’s more, they can remember for up to three months. And have shown the ability to distinguish time intervals.

These are some of the qualities that make goldfish one of the more easily trained intelligent fish.

Individual goldfish also have distinct personalities. Some are shy, while others are bold and outgoing.

In aquariums, they are very friendly and social. But they can also get lonesome, so keep them in pairs or groups.

They are well-tempered and very curious. You’ll often find them exploring the various decorations and substrate.

Many aquarists believe that the Oscar fish is the smartest fish.

They display advanced intelligent behavior, including:

Additionally, Oscars are one of the few aquarium fishes you can train. For instance, you can teach your Oscar fish to jump out of the water for food or eat from between your fingers.

On the flip side, Oscars are not community fish. They are predatory animals and should be kept in species-only aquariums.

They are also carnivorous and can grow very large. As a result, they require a lot more maintenance compared to dwarf fish.

#4: Neon Tetras: The Jewels of Fishkeeping

With iridescent blue coloring and a bright red tail, Neon Tetras are stunning freshwater fish. So much so that they are sometimes referred to as the ‘jewels of fishkeeping.’ 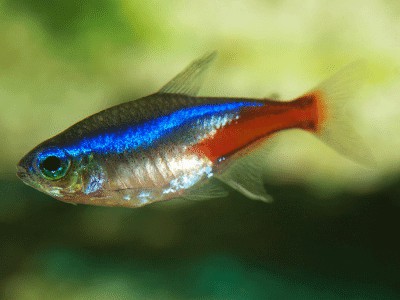 But Neon Tetras aren’t only about their looks; they are also whip-smart:

Like humans, Tetras have developed a need for private space to live and get territorial to protect it. In the wild, they define territories in the sea; however, space can be tight within the confines of a tank.

In this case, they create their own sheltered areas and chase away any tank mates who wander into their space.

But don’t mistake this to mean that they are aggressive. In an adequately sized tank, Neon Tetras are mild-tempered and will live well with other peaceful tankmates.

The Guppy fish is one of the most popular tropical aquarium fishes. They are small, easy to keep and bring a blend of vibrant colors and activity to a community tank.

This is likely why they are one of the best-recommended fish for newbies to the hobby.

Guppies are lively and highly adaptable. They can survive in a wide range of water conditions (between 50℉ – 80℉) provided the temperature is kept constant.

Additionally, Guppies are one of the smartest fish you can keep. In a study published in Current Biology, we learn that they possess a rudimentary ability to count.

Scientists from Uppsala University in Sweden were able to use these numerical abilities to investigate whether brain size impacted intelligence in guppies.

From the experiment, they were able to learn that large-brained females outperformed their male and smaller-brained female companions.

In addition to their remarkable intellect, Guppies are also very social. They thrive in communities, which is why it’s advisable to keep them in sets of three. They will also do well in peaceful, shared tanks with similar-sized fish.

Flowehorn Cichlids are big fish. They grow to a maximum size of about 10 inches and can live up to 12 years.

They are so named because of the hump that grows on their heads. They are active diggers and, as a result, can be destructive when kept in a planted tank.

Despite this, Flowerhorn Cichlids are still considered the ultimate pet Pisces. They are highly interactive and remarkably intelligent fish.

They have the ability to recognize people around them and respond to them. Some even know to lift their humps out of the water to get petted, like puppies.

However, they can be aggressive with other fish. They like feeding on invertebrates and smaller fish and thus not suited for life in a community tank.

Because of how much they like to dig, ensure a sandy substrate in their tank. This will allow them to explore freely without sustaining injuries.

Fish are popular pets across the globe, and with good reason. Watching them swim can be cathartic and helps lower anxiety.

For more information about fish and fishkeeping, visit Aquarium Sphere—Your one-stop resource for all aquarium and fish keeping advice.