Fish Tank Smells Bad and Is Cloudy – What to Do?

A smelly fish tank can be quite unpleasant to have.

Whether you are new to fishkeeping or have been doing it for some time, it will discourage fish tank owners from pursuing the hobby.

Read on to find out the reasons behind smelly and cloudy fish tanks and how to resolve these issues.

Why Is the Fish Tank Smelling Bad? Possible Reasons!

There can be many reasons why your fish tank may smell bad.

Dead fish are one of the most common causes of smelly fish tanks. Any small fish that dies is usually eaten by the larger fish of predatory types.

However, the larger dead fish will float in the tank and will decay slowly. This decay process is why your fish tank smells so bad.

It will secrete oils and proteins that will reach the water surface and evaporate.

If the dead fish isn’t removed, it will pollute the whole tank. Dead fish should be removed immediately before it contaminates the tank; otherwise, the smaller fish will eat it.

It is also possible that you don’t notice the dead fish. This can be because of the dead fish lying in a hidden place.

Fish owners should be vigilant in removing dead fish from their fish tanks.

There will be a time when your filter may stop working or has reduced effectiveness.

This will stop it from filtering the water as the dirt, and waste particles can block it.

The accumulation of these tiny particles can form a layer of foam on the filter. This prevents the water from passing into the water, leading to partial cleaning of the water.

Hence, your filter may still be active, yet it is not able to do its job properly. You will have to check the filter pump and get it cleaned.

Excess amounts of food given to the fish will be ignored by the fish.

The food will sink to the bottom of the fish tank and will help the bacteria to grow. The bacteria releases gasses that will make it smelly.

Generally speaking, people throw in food randomly for their fish which is, in fact, the wrong way.

You should wait for the first bite of food to be properly eaten by the fish before giving the next amount.

Excess food will remain floating around and will eventually get completely wet, making them unfit to be eaten. The air inside them also gets expelled out.

When the air is removed, the uneaten food will start absorbing water and get heavy. This will cause the food to sink to the bottom of the fish tank.

Too much food will form a layer of waste food on the substrate, which will contaminate the water.

It is recommended to feed the fish twice or thrice a day to give them enough time to be ready for their next meal.

Naturally, all the waste products from the fish will contaminate the tank water. The size of the fish also affects how much fish waste is produced.

It is imperative that fish owners should have a proper filter in the fish tank. The filter will suck all the waste in and prevent the water quality from falling.

Tank filters are quite easy to clean as compared to cleaning the whole aquarium. Fish waste will always cause a bad smell to emit from the fish tank.

Fish waste is also one of the reasons why your tank water looks cloudy. The tiny particles will float around and reduce the water quality.

If your aquarium has a lot of fish in it, you can expect a lot of fish waste to accumulate. Make sure you are doing a thorough cleaning of your fish tank.

You can also change the water at intervals. This will replace the contaminated water in one go and is a good technique to have clean water at all times.

Most aquarium plants require a lot of sunlight to thrive.

However, many aquariums are placed where access to sunlight is not possible. This affects plant growth in the aquarium.

Dead plants, if not removed, will start rotting, causing a bad odor to emit from the fish tank. Furthermore, the small pieces of decaying plant matter will make the tank cloudy.

Sometimes your fish tank may have a moldy smell.

However, it won’t be the mold behind this smell. This smell is usually the result of the growth of fungus and algae.

The blue-green algae (known as cyanobacteria) is actually quite common. This algae is usually the cause behind that moldy smell.

While there are other causes of that smell, the blue-green algae will cause a layer to form on the tank walls and other surfaces like decorations and rocks.

The other type of algae is brown algae (known as diatoms). Brown algae will also form a layer on the tank surfaces, but it will be brown in color.

When the algae is removed from the fish tank, it will immediately start producing a bad odor which will spread in the whole room.

To clean the tank from algae, you will have to remove the substance physically. Make sure you maintain the water chemistry as it can cause algae to grow again.

While decorations make your fish tank look vibrant, they can also impact the water quality, which leaves a foul smell coming from the tank.

The colors of the decorative items may consist of various chemicals. These chemicals can react with the tank water and pollute it. This can easily kill your fish.

One way to check for the smell is to keep the water tank free for a few days. This will help you identify if the decorations were the cause of the smell or not.

Why Is the Fish Tank Cloudy?

A cloudy fish tank has decreased visibility for the tank occupants. This will make it difficult for fish to swim. If left unchecked, the fish will start dying.

There can be several reasons why your fish tank may appear cloudy. The cloud is usually because of excess food particles and other waste types.

Such waste in the fish tank will produce ammonia. There may also be nitrifying bacteria that are responsible for producing ammonia from the waste particles.

Fish owners should make sure the ammonia and nitrate levels in the tank water are kept at zero. Excess ammonia will cause inflammation of the fish gills that might even lead to their deaths.

While both ammonia and nitrate are dangerous for your fish, nitrate is still less threatening than ammonia.

Fish tank owners should take all the appropriate measures to remove the bad odor from their aquariums.

How to Remove the Smell from a Fish Tank

Some of the ways to remove the bad smell from the aquarium are given below.

By changing a certain amount of water at regular intervals, you can keep the fish tank free from waste.

You must also ensure your filter pump is cleaned too to continue its effectiveness.

As a rule of thumb, an aquarium having freshwater should have its water changing process after every 15 to 20 days.

Dirty water has a significantly lower amount of oxygen in it.

In case you don’t remove the dirty water, the fish will struggle to breathe because of the less oxygen. They will start swimming near the water surface as it has more oxygen than the bottom.

There are various test kits available that can help you test the tank water for ammonia levels.

The tank bottom is full of waste products. Most waste particles will sink to the bottom of the tank, getting trapped in the substrate or the water bed.

Removing waste particles from the substrate can get difficult as some particles may be trapped in the crevices and other hard-to-reach areas.

You can use a pump to remove the waste particles on the substrate. But before that, you should remove the fish into a separate fish tank.

Once the fish is removed, insert the pump pipe until it gets to the very bottom of the fish tank.

The pipe will then be able to remove all the particles stuck in the sandy or gravel substrate. 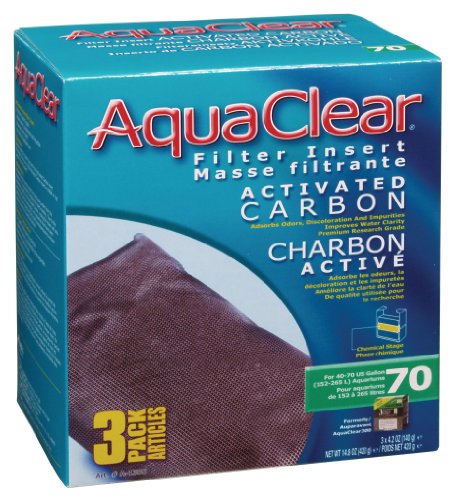 The activated carbon in them removes the bacteria quickly, which will eliminate all the bad smells from your fish tank.

The whole filtration process involves passing the water through activated carbon. The waste particles are trapped, leaving the clean water free to pass through.

However, it is important to remember that carbon filters themselves need regular cleaning for their maximum effectiveness.

Although a smelly and cloudy fish tank is highly undesirable, it is not the end of the world.

By taking appropriate measures, the bad smell can be removed along with the cloudiness.

A smelly and cloudy tank is mostly caused by waste products. If the waste particles are removed regularly along with the water being changed, you can restore the pristine look of your tank.