What Is Dragon Stone for Aquarium?

It’s safe to use in just about any tank setup and helps to support a thriving ecosystem.

Here, we will discuss what dragon stone is and how you can use it to reimagine your home aquarium.

What Is Dragon Stone? 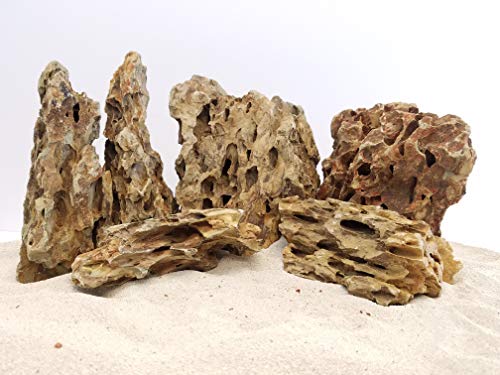 Thanks to its high concentration of clay, dragon stone is more lightweight than most other popular aquascaping rocks.

Dragon stone is fairly easy to identify based on appearance. However, looks can vary based on where the stone comes from and how it gets harvested.

Dragon stone is best known for the scaly, dragon-like texture from where it gets its name.

It often looks somewhat like petrified wood or driftwood, making it a popular aesthetic choice for tank owners. 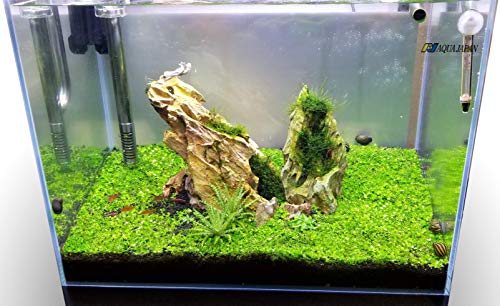 Small holes and divots form in young dragon rock as high-pressure waves drive sediment into soft sections of the stone.

Particulate matter chips away and penetrates deep down to leave rough marks hewn in and around the stone.

Hard sections of the rock, on the other hand, hold firm against the waves. Dragon rock grows as pressure from the tide packs sediment onto these surfaces.

As fresh clay and microorganisms pile up on the surface of the rock, the sun gradually bakes them until they harden. This process also affects the color of the stone.

Dragon stone is most often brown or olive green, depending on the concentration of clay and organic matter on the surface.

Dragon stone can also be red, yellow, or orange in appearance, depending on where it gets harvested.

Where Does It Come From?

Traditionally, aquarium dragon stones come from the shorelines of lakes, ponds, and oceans in Japan.

The rough waters and ample sediment make it the ideal hotspot for dragon stone growth.

Japanese dragon stone is relatively rare, as it takes a long time to produce. It can take decades for genuine Okho stone to mature.

Dragon stones harvested outside of the Ohko region are often easily identifiable by their color.

Instead of a mossy brown or green color, these stones often display more vibrant reds, yellows, and oranges.

Dragon stone holds up well in most freshwater aquariums, but it tends to fare best in environments similar to its natural habitat.

With an acidic tank setup, you’ll see slower degradation and weathering of each rock, leaving your aquascape looking better for longer.

Why Use Dragon Stone in Aquariums?

Many aquarium owners choose to include a hardscape in their tank setup. Dragon stone is a popular hardscaping choice, thanks to the many benefits it has to offer.

Adding materials such as rocks, wood, and other decorations creates a healthy foundation for an underwater ecosystem.

Hardscapes offer a good place for live aquarium plants to anchor as they establish.

A creative hardscape setup will also provide tank inhabitants with plenty of spots where they can explore, hide, and relax.

For shy fish such as bettas, a rocky hardscape can help to reduce stress and provide plenty of stimulation.

The Benefits of Dragon Stone in Fish Tank

Dragon stone’s scaly texture is not only attractive but can make a useful addition to a growing aquascape.

Its porous surface offers plenty of spaces where live plant roots can latch on and anchor. Roots can easily pick up nutrients as water filters through the dragon stone.

What’s more, the many nooks and crannies offer safety and security for creatures of all sizes.

While fish can swim and hide between rock structures, smaller tank inhabitants such as snails or shrimp can set up camp in smaller openings.

Thanks to its porous structure and clay composition, dragon stone is also surprisingly lightweight.

It’s safer to use in aquarium structures than other heavier alternatives. If it topples and falls, it’s less likely to injure fish and other aquarium inhabitants.

Because it’s so lightweight, aquarium owners can safely build large or tall hardscapes in their aquarium without worry.

Unlike alternatives such as limestone or coral rock, dragon stone won’t affect the pH of your tank water. It’s an inert rock and doesn’t shed into the surrounding water.

Dragon rock is generally safe to use in any freshwater setup, even with pH-sensitive plants and fish.

Aquarium owners should keep in mind that dragon stone is prone to accumulating debris on its porous surface.

While the rock itself won’t affect pH, sediment and organic matter trapped inside might. It’s important to clean dragon stone regularly to maintain tank health.

The Risks of Dragon Stone

Dragon stone is generally safe to use in aquariums as long as it’s clean and anchored.

However, aquarium owners should note that dragon stone is fragile. Its porous structure makes it brittle and easy to break.

Dropping or even rough cleaning can break dragon stone or cause chipping. It’s a good idea to use hand and eye protection when cleaning or handling dragon stones.

A high-pressure water flow may also cause breakage in a dragon stone setup. At the very least, it will erode carefully constructed hardscapes over time.

Dragon stone is also prone to accumulating dirt, algae, and other matter along its rough surface.

While it may be tough to handle, you must clean dragon stone regularly.

Aquarium owners who choose to include dragon stone in their setup should be prepared for careful, long-term maintenance of their aquascape.

Before adding dragon stone to your aquarium setup, you must clean it thoroughly. Doing so is especially important for tanks that already have live inhabitants.

An unclean or poorly cleaned dragon stone can end up leeching dangerous compounds into the water, potentially changing chemical composition and pH.

You may even see the water change color.

With a new dragon stone, you must first rinse it thoroughly in a bucket of cold water.

Turn your hose to a medium pressure setting to remove debris from cracks and pores without damaging the delicate stone.

You may have to come in with a soft toothpick or wooden skewer to remove lodged or trapped materials.

Continue rinsing each dragon stone until you see the water running clear of harmful compounds or sediment.

After cleaning each rock, you can then add them to your aquarium without an issue.

When cleaning your tank, remove each rock and rinse with cold, clean water on medium pressure.

You may need to use a soft brush or skewer to remove stubborn debris.

Also, remember that your dragon stone could also be harboring beneficial bacteria. While you want to clean the stone and get rid of debris, don’t scrub it or try too hard to clean it. It can remove beneficial bacteria which are actually helpful for your fish tank.

Many people add dragon stone sculptures as the main focal point of their tank.

While some incorporate large, unbroken rocks into their aquascape, others prefer to customize the look of their stone structures.

You can easily break apart dragon stone into smaller pieces of stone to create towers, arches, caves, and more.

One of the easiest ways to break up a large piece of dragon stone is by wrapping it in a towel and hitting it with a mallet or hammer. However, this may destroy some of the expensive stones.

One popular stylistic choice for dragon stones in aquariums is the iwagumi setup.

This traditional Buddhist design philosophy uses striking yet simple rock formations as the main focal point of a tank setup.

Other aquarium owners prefer to give less attention to their dragon stone setup. Instead, they make it a foundation for plants, aquarium grass, and other decorations.

If you’re looking for an alternative to dragon stone, there are plenty of other hardscaping materials with similar properties.

Petrified wood has a rough, scaly surface that’s similar in appearance to dragon stone. It also comes with a wide variety of attractive color patterns.

Pagoda rock also boasts plenty of nooks and crannies along with bright, vivid colors such as reds and oranges.

Always make sure to look into the potential effects of adding any new decor to your tank, especially if it’s a natural material such as stone.

Dragon stone can make a beautiful and functional addition to almost any freshwater aquarium.

It offers a safe sanctuary for fish and plant life alike, helping to create a thriving ecosystem in your tank.

With proper care and maintenance, a dragon stone hardscape could transform your aquarium setup.